Some people have - directly or indirectly - expressed the idea that my daughter is maybe just easy to handle. A relaxed, sweet girl by nature. And there were times when I wondered about this myself!
Having said that, after three years, I've seen her in lots of different situations. The biggest differences in her behavior occur when she's with my mother (who does not apply the Continuum Concept).
My mom will say to my daughter:
"You are SUCH a diva!"
"You are too strong-willed".
"Little terrorist".
"Well, that's something you've got to learn to get used to".
"Oh oh, little miss don't-touch-me is a bit sensitive today, isn't she?" 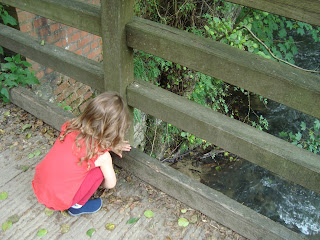 One day my mother was here to visit, and she went grocery shopping with my daughter (around two and a half back then). When they came back, my mom told me that my daughter had had a major meltdown in one store. She was so loud in her tantrum that people started looking, and that pretty much everyone paid attention to them. My mom had to lift her up and carry her outside while dd was kicking and screaming right and left. When asked what happened before that, my mom said she did not allow dd to take something she wanted to have.
Same situation: Dd and I often go to stores together. She touches whatever looks good to her. She will often ask if we can buy something. Sometimes, when she was younger, she would take colorful products that looked good to her and put them in the basket (that what she sees me doing!). That alone was so sweet ... she would often even "read" the labels. Often it was something that I did not want to buy. I said something like "Oh, thanks dear. We don't need that today. Could you put it back?". Then she put it back. Ha! Sounds too good to be true, right? I think attitude is more important than the actual wording.


Alexsandra Burt said that foraging for food is one of the most natural things humans can do. Really, the more I think about it, the more I believe grocery shopping with toddler can actually be quite fun. I think assigning them little tasks really helps. Dd pretty much always wants to help me do whatever I do.
Many people have commented on how they've never seen a toddler that relaxed when shopping.
I remember one day when we were at the checkout, where all the candy is. Not that I do mind her eating candy. But she took several packages of something I did not want to buy, mostly because I was sure no one would eat it. She was passionate about this stuff as it looked so beautiful. I told her to put it back. Seriously, I literally heard the people behind me gasping! A nice elderly couple behind us smiled and said "Oh, good luck ...". And then guess what: Dd put it all back. The elderly couple commented on how this was the last thing they had expected.
For a while, I let dd pick one "chocolate lady bug" in our organic store every time we went. After a few weeks, she wanted to keep buying them, but stopped eating them. I don't particularly enjoy those myself, so I did not want to buy them just to let them go to waste. It was a bit of a change for dd, but each time she wanted one, I said if she really wants to eat one, we can come back later and get one (which I would have done if she had ever asked about getting one - she never did). That sounded ok to her and we went to the check out, paid for our groceries, and left.
On the way to the check out, I pretty much always tell her that anything in a glass is my job, but she can put the entire rest on the counter. For a long time, I let her hand over the money at the check out. Once or twice, she thought it was fun to drop the bill on the floor and I had to pick it up. I discontinued giving her the money. Not as a punishment, but to show her again how it's done, in a calm and relaxed fashion. Alexsandra confirmed that this is probably the best way to handle it (I was a bit worried back then because it had happened in the first place. Somehow I thought things like these should not occur at all. Haha. Turns out they do!) We took up our habit of her paying after a while and everything was fine.

Really, by now I have realized on several occasions that how we treat children can lead to very different outcomes. I hope that makes sense.
Posted by Continuum Mom at 10:12 PM